“HGT Horizontal Genetransfer can bring naked DNA, rests of GMOs genetic manipulated information and so on in wild species and cultured plants and animals and human beings. Most Scientists don’t like to speak about this fact of nature! I hope my investigative public relations about GMO HGT DANGERS will help to correct the very big scientific mistake of IPBES Antalya! I am sure: In Bolivia, Brasil, Argentina, Mexico … indigenous knowledge knows danger of GMO HGT Horizontal Genetransfer!

Why are my scientific colleagues in Germany lost in Silent Spring of DNA Recombination Danger? 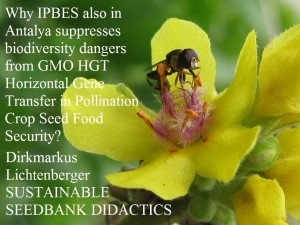 I work modestly with my Antirrhinum Snapdragon as pacifistic model for origin and phylogeny of biodiversity. Scrophulariaceae or Plantaginaceae? California or Mediterranean sustainable station with sustainable seedbank didactics? Be or not to be with bee and wild bees?

Can You hear in soundecology, soundscape and acoustic ecology some mysterious animals transferring horizontally DNA from our neighbours or do You need much more DNA barcoding and landscape genetics for saving biodiversity and ecosystem services instead of watching traditional knowledge and local knowledge?” 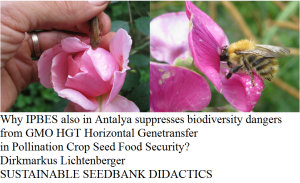